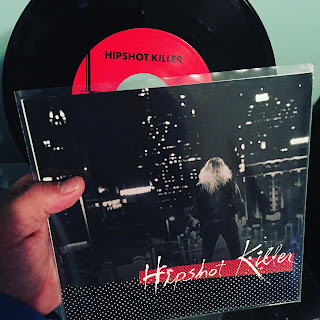 Hipshot Killer is a three piece punk band drawing heavily from the dirtier side of late-70's power-pop. The band has been performing since 2009, but LONG before that band members Mike Alexander and Chris Wagner were in the The Revolvers together, In addition, Wagner and a one-time Hipshot Killer drummer were in The Breakups.  These guys are old now and probably have kids and stuff. Those bands were 20 years ago. But, to their credit, the years look good on them, they've gotten a wiser, they've grown out of simplicity of old Descendants records and stretched out musically. They still wear Chuck Taylors, though. Seriously, drop that, you'll be confused for a Kelly Clarkson fan.

Even in their Chucks, they're a bit tougher and got some power-pop hooks to go along with their punk rock chords. They've released a full length and this new 7" represents the 5th in a series of singles put out by Too Much Rock. As stated previously, Sid at Too Much Rock puts out the singles provided the band does a song of his choosing. The band gets all benefits and the records, Sid just helps out local music. For this release, Hipshot Killer was given the early 90's proto-emo song, Sky Flying By" by Samiam. For Hipshot Killer, it's an easy task and they remain true to the original track which was likely a song that influenced the Breakups way back when.

The original tune by the band, "All The Hell in the World," wins the award for best song title of the year. It's got 90's teenage angst, but finds adulthood in the end. The track builds up with guitars until it blows up into a singalong, but the lyrics have a lot more in common with a Bruce Springsteen song than the typical 'damn the man' punk-rock anthem.

The single will be released 10/21 at local record stores. The band will be performing live 10/22 at Mills Records and again on 10/25 at Davey's Uptown. A Lawrence show is in the works. If you search you can find a stream of "All The Hell in the World", but the B-side is off limits unless you happen upon on it on the radio or buy the single.

https://hipshotkiller.bandcamp.com/
Check out the A-Side
Posted by Unknown at 8:57 PM