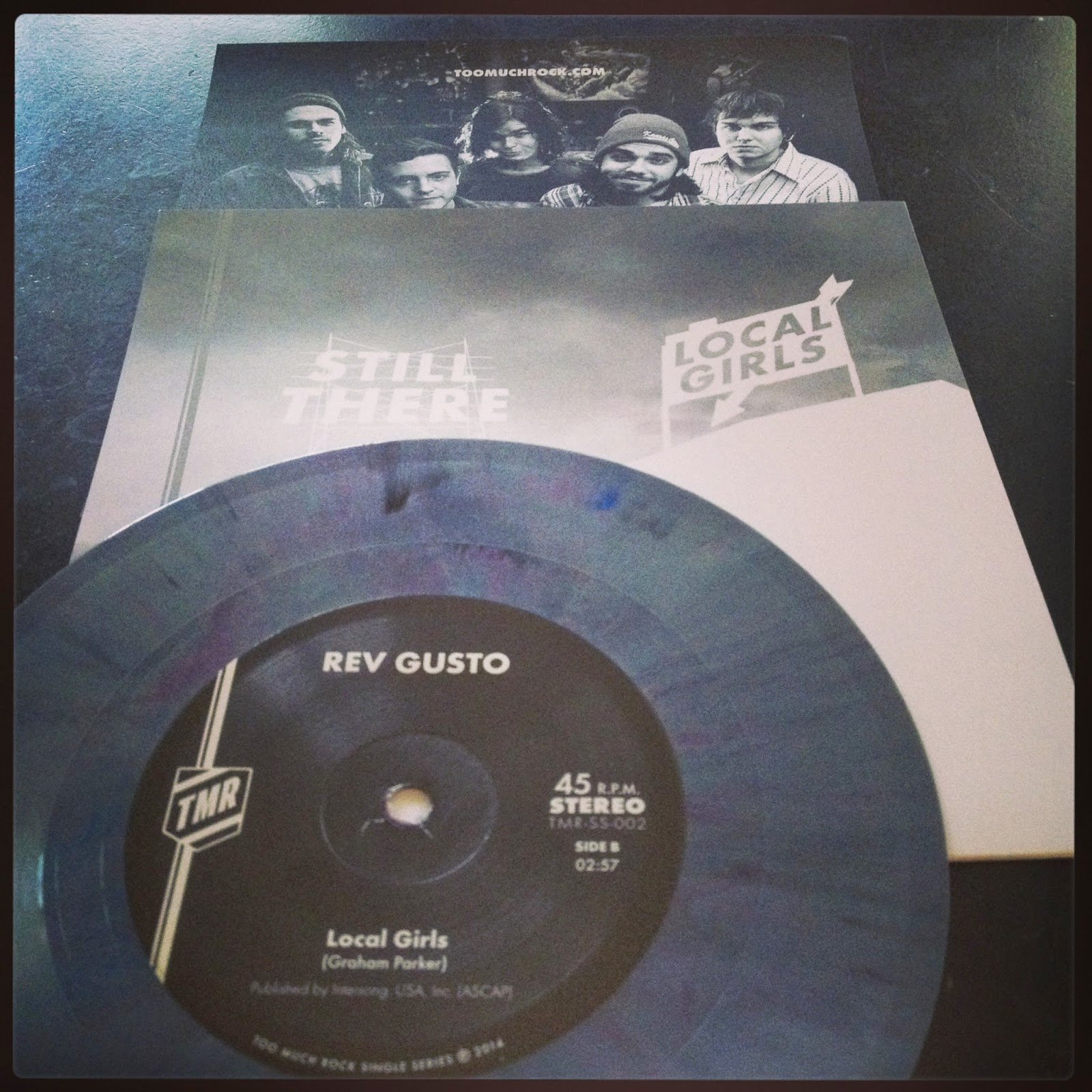 
*****
Sid Sowder's absolutely selfless Too Much Rock singles series continues!  This edition features Kansas City's Rev Gusto.  I just got a copy of this and wanted to share the news...It will be available tomorrow (4/19/2014) for purchase at Vinyl Renaissance, Mills Records and Love Garden as part of the Record Store Day celebration.  After that, you'll probably be able to find it for a little while depending on what the band does with their singles.  Just saying, if you're out at any of those stores, pick up a copy, support local, it's rad.  Actual blog post to follow.

Again, I'd like to express how truly selfless and awesome this singles series is.  Too Much Rock selects an artist to release a single, the first side is the band's and the flip side is a cover selected by Too Much Rock for the band to do.  Too Much Rock then puts the single together and without making back a dime gives the release to the band.  The local scene wins because a local band gets a release and some cash, fans of vinyl win because they get a rare disc and something by a great band.  The only one that losses is Sid Sowder of Too Much Rock...Selfless.  This release will be sold at three area record stores on Record Store Day, I imagine to get the word out on the series locally (this is only #2, #1 was this), but I'm going to bet all proceeds from Record Store Day are going right back to Rev Gusto.  I mean I even tried to pay Sid for this release and got no response.  Then, when he said he'd send a copy for review to a few local music sites, I even asked to pay shipping (I mean, who in their right mind is willing to take such a big hit, I'm all about helping, y'know?) and again was met with no response, just a package in the mail containing the single.

As for the music, this is Rev Gusto's first physical release.  They will likely hold onto many of their copies for sale at shows, so after RSD, may have to pay cover to find a copy.  My understanding is that 500 copies of the 7" are put out, so it's pretty rare.  The band formed in high school and most them are fresh out, not yet old enough to partake in alcohol served at the bars they perform at.  They're being labeled somewhere between power-pop and garage rock, truthfully, they're a bit too proficient to be garage rockers, but their sound is pretty raw.  They've been performing a lot locally, did a show for Middle of the Map Fest and even did a big-timer show at South by Southwest.  Overall, the kids seem to like the band's lazy power-pop. 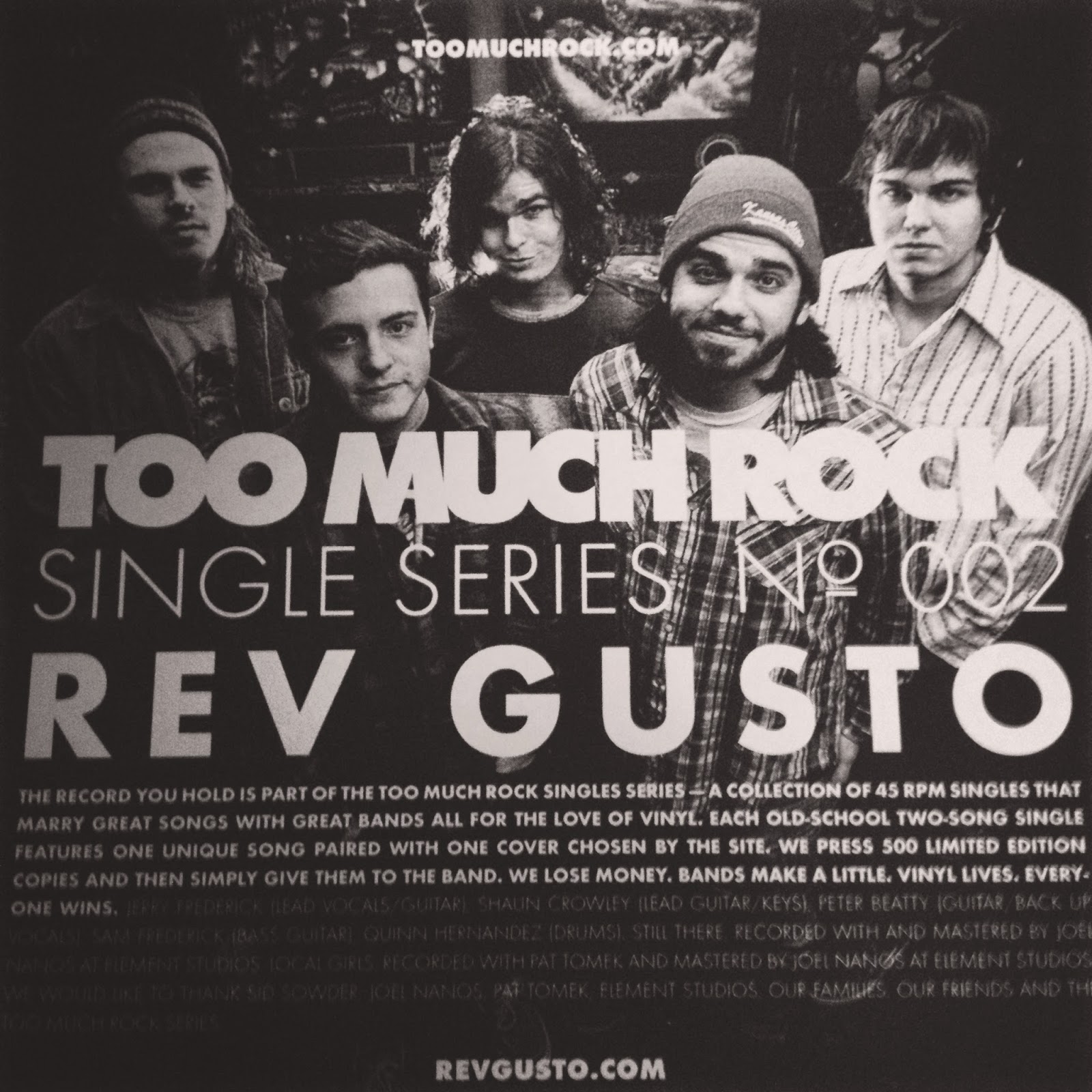 The band's song on this release, "Still There," is drenched in feedback and choppy guitars.  The vocals strain and come off a bit forced at time, just trying to sound a little cooler than they need to.  You definitely hear where the power pop tag is coming from, but again, the tune is so drenched in guitar and distortion, it's hard for me to make that kind of leap.

For the B-side the song "Local Girls" by Graham Parker was selected for the band.  What they did
with it is fucking brilliant.  I used to host a power-pop show on KJHK and spun both US acts and the British pub rock.  Fans of the pub rock scene swear by Parker's "Squeezing out Sparks" album, but outside the song "Local Girls," I found the album pretty boring (the rest of his catalog even more so) and even before I'd spin this track, I'd opt for Costello, Nick Lowe, Squeeze or even Joe Jackson.  It's not as if the band does anything radical to Parker's tune, in fact, it's true to form and they're able to keep the jitters and nervous energy.  The thing I like about Rev Gusto's version is that the attributes of the song fit a bunch of 19 year old kids better than they did Parker.  I always felt Parker was kind of a hack, just an old talented dude copping on the new sound.  Rev Gusto put their fuzz on top of the track and the lazy power pop sound they've developed as a band and it works; solid cover.

Rev Gusto Website
Big Timers on the News
Posted by Unknown at 7:09 PM