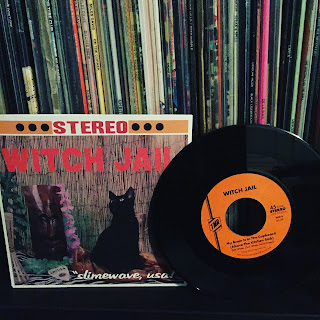 Just received this 7" and the festivities are already on for the release. The single is available to listen to at the Pitch website linked below. Mills Records already hosted a show and single release party, the b-side, Alien Sex Fiend's, "My Brain is in the Cupboard (Above the Kitchen Sink)" has premiered on KKFI. But, still to come is a 2/18 show at the The Brick in KC and a Lawrence-area release show yet to be announced.

Can't discuss any of the band's history, because I don't know it, but they're a KC band that's put together an outsider retro-rock sound. Their name is great and they use stage names like Guy Slimey and Suzy Bones. Slimey's vocals owe a lot to the 80s underground as they seem to fall between Jello Biafra's snotty affliction and the white-guy soul screaming of James White or James Chance (depending on what album you have). Everything about them, though, is super cool. Again, the name is great, the original track title is fantastic, the artwork is ultra-cool.

Their sound draws from a host of forgotten scenes, there's been a garage revival, a rockabilly revival, surf revival and even a lounge revival, All of which took the respective original scenes and amplified the best aspects. Witch Jail just kind of takes that same idea and combines all the scenes to spit it out in loud, yelping, punk attitude. You can't pin them on just one thing, but, the most unyielding influence seems to be the pyschobilly scene of the 80', something I thought was long forgotten. It's nice to hear it again, especially when it's thrown in a mix of other great ideas and not dependent on a sole rockabilly formula.

The band's cover track, as selected by Too Much Rock, is an Alien Sex Fiend song previously mentioned. What's great is that if no one ever told you the song was once a track from the noisy 80's industrial scene, you'd never know. As discussed in the linked Pitch article below, Witch Jail just took the lyrics and did their own thing.

Listen to Slimewave, USA!
Posted by Unknown at 6:28 PM