I was stalking the Too Much Rock for a considerable amount of time trying to get more info on the next release, because it's one thing I actually like. Totally punk rock, dude just makes records for a band to do whatever with. After a while, I gave up, thinking the idea of basically giving away 7"s isn't a sound business plan and Too Much Rock had gave up after 3 releases.

But, just when I go to sleep on it, Sid Sowder woke me up to advise about release #4. The featured band is the Uncouth! who've been playing their working class Oi! around town for the last few years. They look pretty mean; like soccer hooligans. They play pretty mean, too. The band's own cut is titled "KC United," which you know, is another unity song, this one calling for KC's punks and skins (the working class skins and not the neo-Nazi variety). The flip side is a cover of "Gudbuy T'Jane" by Slade. It's not as pretty as Slade, though. However, listening to it knocks out a front teeth and they kept the hooks, y'know, cause punks like chanting a chorus.

I've been listening to the tracks and it's good, but I haven't got my hands on the vinyl. It's street date is set for May 15th and a release party will be held at Mills Records. 500 are pressed and ready, 100 will be random colors, the other 400 standard black. 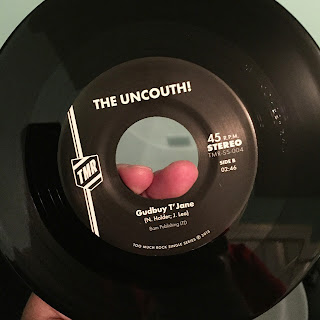 Got my own copy of this from Too Much Rock and glad to have it. Much better fidelity than the internet stream I was enjoying last week. It appears most of the colored variants are being sold at Teenage Heart Distro, but again, release party as far as I know is set for May 15th, 2015 at Mills Records.

I'm really digging the cover of Slade's "Gudbye T'Jane," the "KC United" track is fine (a little obvious, again, every punk scene needs a Unity song), but I love that this band has the chops to do some guitar solos, yet manage to keep things punk rock. You can tell by the photo, these aren't kids kicking around in boots, these guys won't get carded for the cigarettes they're smoking.

The Uncouth! on Facebook
Posted by Unknown at 7:35 PM

Email ThisBlogThis!Share to TwitterShare to FacebookShare to Pinterest
Labels: 7", EP, Too Much Rock, Uncouth!