Schwervon! Landlocked b/w Off Duty Trip Too Much Rock 2013 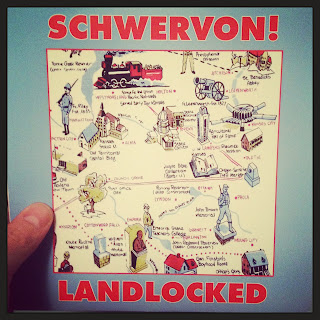 This 7" represents the best idea in local music of the year, if not ever.  Too Much Rock is a blog run by Sid Sowder who used to put out releases under the label Urinine.  His idea with this 7" series is unique.  He will select a local artist to record, he allows them one side for their own tune and he/his website picks a cover tune for the band to do.  He puts up the funds for the release, but doesn't recoup anything, the band gets the singles to sell.  Label loses, but the website gets to pick a cover tune.  Each single will be limited to only 500 and not be announced until they are being held in Sid Sowder's hands and ready for release.  Neat-O.

The band Schwervon! upon first glance doesn't seem all that local.  The male/female duo only recently came to KC from New York.  However, Matt Roth is from the area originally and gigged in local bands prior to moving to NYC.  He and his female counterpart, Nan Turner, have been self releasing under the moniker Schwervon! for some time.

The band's tune,"Landlocked", is tiny at just over two minutes.  Seeing how it's just a male/female duo and they cover the Raincoats on the B-Side, I'd like to call it twee-pop, but with all the guitar riffing, you can't call it that.  They chant the vocals and have a hip-hop breakdown, plus they even find time for a garage riff-tastic solo.  It's solid.  The Raincoats cover is, "Off Duty Trip," from the Raincoats debut album.  Schwervon! do a do a fine job with it, kind of hard tune to screw up.  They certainly make it less dissonant and punk than the Raincoats, this is a very pop-oriented cover (probably because Schwervon! are better musicians, it's hard to fake amateur-ness), and the "Professional" chant part in the song, Schervon! nail it.

Best apart about the release though, is the cover.  Man, I love this cover.  It's got this nifty little map drawing of Kansas from KC to Junction City, it shows these crude landmark drawings and now I want to visit things like the John Brown Memorial and William Allen White Memorial.

Schwervon! A Tune not on this 7"
Too Much Rock Blog and Website where you should go and buy this so they'll put out more.
Posted by Unknown at 7:59 PM